I Wanna Talk About ME

Toby Keith can be so inspiring... I wanna talk about me, I love this bar, I should've been a cowboy, red solo cup... j/k!  I do like Toby Keith!

Anyways, back on track...

The past 2 months were special to me with Mother's Day and my 30th birthday!

All I wanted for Mother's Day was a nap!  I was able to squeeze in a quick one :)  But when I woke up I was surprised by my friends with an afternoon to do whatever I wanted!  Dave and a couple of wonderful ladies planned for some to watch babies and some to take me around to do whatever I chose.  Of course with such options I could not decide what I should do with 4 hours!  We ended up getting pedicures and perusing a few of my favorite stores since I never leisurely shop anymore.  It was
just the refresher I needed!

It's no secret that I love birthdays.  I think everyone's birthday should be celebrated, I mean why not- it's your day!  My 30th was pretty low-key, but that's how I wanted it.  I have wonderful friends and family who made sure I had all dessert bases covered- cake balls, cookie cake, cookies, ice cream cake, brownie cupcakes w/peanut butter frosting, and a big bag of Reese's Pieces.  Can we say sugar high?  I was able to sleep in on my birthday and my dad got the traditional birthday donuts and kolaches.  I have two fabulous friends who share a birthday very close to mine so we had a joint party with a few other girlfriends.  It was a blast!  Of course I loved having a few hours out of the house to spend with friends with no kid distractions.  Dave, my parents, and I also got a dinner out to my favorite Mexican place El Tiempo- it's an annual tradition for Dave and I.  Great ways to kick off my 30s!  Who knows what this decade will bring?!

Posted by Perkins Family at 3:34 AM 2 comments:

Thanks to my best friend's wedding we had 2 weekend getaways!  The first was to Austin.  We brought the whole family - even Maggie- to Dave's parents' house for the whole weekend.  Everyone- even Maggie- did great in the van.  Dave drove and I manned the back, even did snack time and Leah's feeds by myself.  Maggie was a perfect dog on the road.  Once we were there we took over the upstairs with Dave, Leah, and I in one room and the other 5 in the next bedroom.  This set up worked very well, but it did make me thankful for our 1 story house.  Going up and down the stairs all day and in the night got old after 2 nights.  On Saturday I got a girls day cruising around Lake Travis for Sara's bachelorette!  It was a fantastic baby break and time with friends!  My in-laws had a few of their friends over to see the babies while I was away so there were plenty of helpers and baby entertainers around.  It was a quick trip, but it was fun and nice to see how the babies handled the travel!


The actual wedding provided another travel opportunity.  This time I went alone!  Dave and his mom stayed with the babies and of course our regular helpers came over as much as they could.  I was gone for 72 hours and everyone survived :)  It was a little hard leaving the babies, but Dave let me talk to them a few times and he told me they smiled when they heard my voice.  Not sure if that's true, but I'll take it!  Dave was nervous about being in charge for that long since I do most of the "behind the scenes" work like preparing meals and administering medicines.  So, I pre-made all meals and wrote out specific directions as needed.  I also wrote out the schedule of therapists and visitors, so he would have an idea of who to expect when the front door opened.  He did fine with everything just like I knew he would.  He did say he was tired, had worked harder than he had in a long time, and was actually ready to back to his day job on Monday- haha.

I enjoyed my time away and so loved being there to celebrate Sara's wedding!  Sara and I have been best friends for 10 years and it was great to have a little girl time before she got hitched.  That is so rare these days!  I also got to see lots of Baylor friends I hadn't seen since we graduated.  :)  All of the wedding festivities were wonderful and we wish Sara and Patrick all the best!

Posted by Perkins Family at 12:24 AM No comments:

I had to add on the 1/2 because I'm so far behind!  As usual the blog has fallen to the wayside of other priorities and I will now be doing tons of posts within a few days to catch up.  Maybe this time around I'll do better at keeping up ;)

Anyways, pack it up pack it in, let me begin... (gold star if you know that song!)

Little guy Levi got his helmet off a few weeks ago!!  Helmet free is the way to be!  The neurosurgeon warned us that some kids have adjustment issues to being without the helmet, but Levi didn't miss it for a second.  I thought he might miss it when he bonked his head on something, but nope!  Just keeps on rolling.  Once the helmet was off, his hair started to grow in and he grew over an inch in height!
Ben finally got motivated to move and within a week began crawling, pulling to a stand, standing on his own, and maneuvering the walker with ease.  He's even taken a few steps on his own!  His new favorite game is what I've named the Forward Trust Fall.  He stands right in front of you, puts his arms straight out, and just launches himself towards you while squealing with delight.  I hope there's always a trustworthy person in front of him.

Andrew loves the little indoor slide we just put up.  He's the only one who can use his body weight to get himself going so I just have to catch him at the bottom.  He can also push toys and such around the house, so I think he could take some independent steps, but he prefers to do a quick crawl.  Just recently he has started to be a somewhat picky eater- shows preferences and takes forever to eat non-preferred items.

Allison was the first to take 2 steps on her own!  She just adored the applause.  She also has finally started holding her own cup!  I had to implement a little cup holding bootcamp one weekend to force her into holding her own cup- I knew she could do it!  She's been eating anything and everything lately- and eats as if I've been starving her for 5 days.  I think she may be turning into a little biter...

Caroline is the official first walker!!  I do have a video to share if I ever get it up on YouTube.  She still does not prefer walking as she hates falling down and gives you the stink eye for letting her go.  She loves to flip through books.  She is a great eater like Allison- eats anything and is quick about it.  Caroline's smile seems to be crinklier all the time, but we love it!  Caroline is still the night owl; waking up throughout the night ready to play and putting on her extra cute smile and making baby noises to get attention. 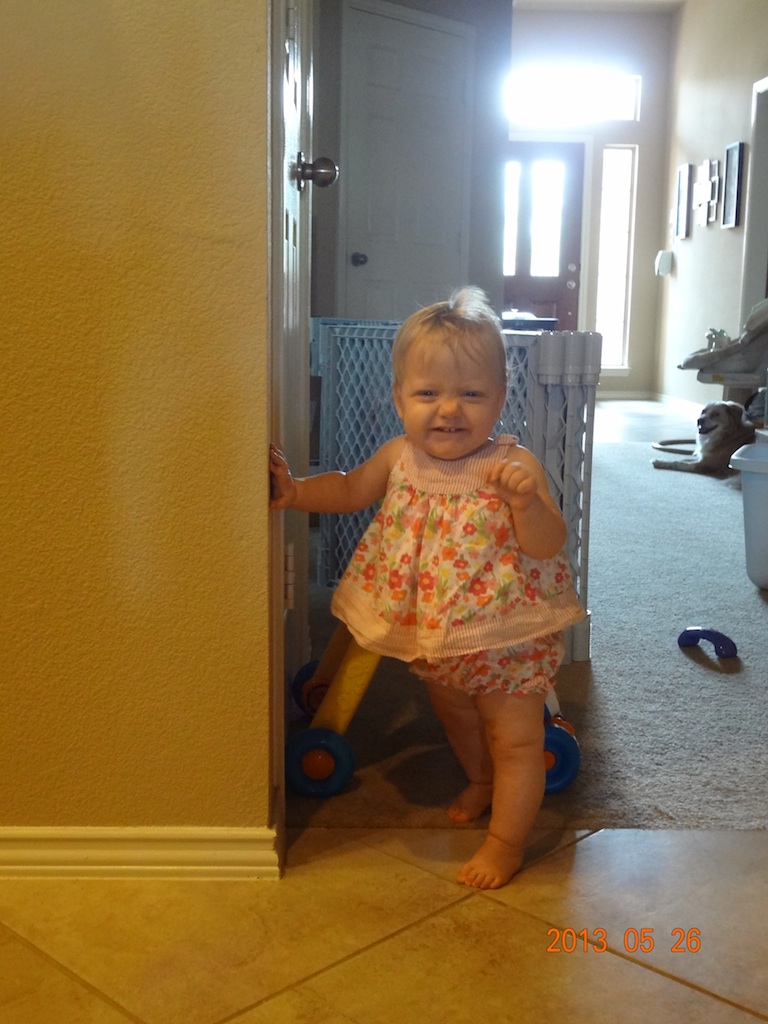 Leah has a new stroller!  It will grow with her for a few years and she can use it for all daily activities!  She had a swallow study done to double check the mechanics of her swallow and reassure us that she isn't aspirating.  Turns out she does aspirate on liquids, but not on solids.  Lots of work ahead to overcome her feeding aversion!  She did start a new medication via her neurologist and it's been wonderful!!!!  She has also grown enough lately to pass up Levi on the baby scale :)

Now that the 5 are eating big people table food- and finger feeding themselves everything- it's gotten much easier to do feedings.  Clean up is another story (Maggie helps sometimes).  I have started cooking again since they eat what we eat.  Crock pots and casseroles are my friends!  So far they've eaten up whatever I give them.  Granted, there are preferred foods and some things are slowly eaten, but they like all kinds of things- even random mixtures of leftovers shunned my family and friends!
So far, summertime has been fun time!  We've busted out quite a few new toys from the birthday like a baby slide, baby pool, water tables, and choo choo wagon.  They all love the wagon.  The water table, pool, and slide get mixed reviews.  They tend to like toys more if I'm there to hold on to.  I did do a toy organization project because there were too many toys everywhere.  So, I copied a quint mom and made several variety bins of toys I can switch out when I want to.  This way there's less to pick up each day and they don't get bored of the same toys all the time.

As part of their 12 month well check we had to travel to a diagnostic testing facility to have all of their blood drawn.  Doesn't that sound like a grand time?  Especially when there are several places to choose from- all 30 min away!  I fortunately had 2 helpers with me this day.  For the sake of quick and easy, I chose to park right in front of the door and take in one child at a time, get blood drawn, then switch out with next child.  The staff was very cooperative- even letting me skip ahead a few people because I had called ahead to let them know we were coming!  Everything was going very smoothly (except for Alli's tantrum resulting in blood going everywhere) when someone stopped me in the waiting area and asked "How many babies you got in that van?"  It never occurred to me how odd it would look to see the same lady going in and out bringing in a different baby each time.  Of course when I answered "6" I got a slew of the usual questions.  But, all in all, it went well and all blood results were normal.

Since there are so many people coming in and out of our house nowadays, I actually do answer the door.  Much different than my previous life where I hid by a window to peak around to see who could possibly be coming to my house and decide if I wanted to risk answering the door.  So, one day I answered the door and it was a Jehovah's Witness lady asking me questions and giving me pamphlets.  Nothing a said deterred her until I just really had to go because it was diaper changing time followed by snack time.  The next week she comes back to see if I had any questions from the pamphlets, except she asked to speak with Leah.  I was quite confused and asked if she meant my 1 yr old daughter and she said no, there was an older woman named Leah.  Uh, no, there's not.  So then she asks, "You're the one who runs the day care, right?" "Uh, no, I have sextuplets.  They're all my kids."  They were shocked and asked quite a few questions (nothing out of the ordinary), complimented me on carrying 6 babies, and said they wouldn't bother me anymore because they knew I was busy.  Yes!
Posted by Perkins Family at 10:52 PM 3 comments: