My babies are 6 months old!  How did this happen??  I was once told by a fellow high order multiples mom that I just had to make it through the first year, then I'd know I could handle it.  Well, we're half way there already!  We haven't had our 6 month well checks yet, so I may update this post later with official weights and lengths and anything of interest that happens at the pediatrician's office.  But for now you just get my summary of each kiddo and their individuality.  One thing in common- blue eyes. I'm also including pictures of each kiddo at 1 month and 6 months to see how much they've changed!  Here we go... 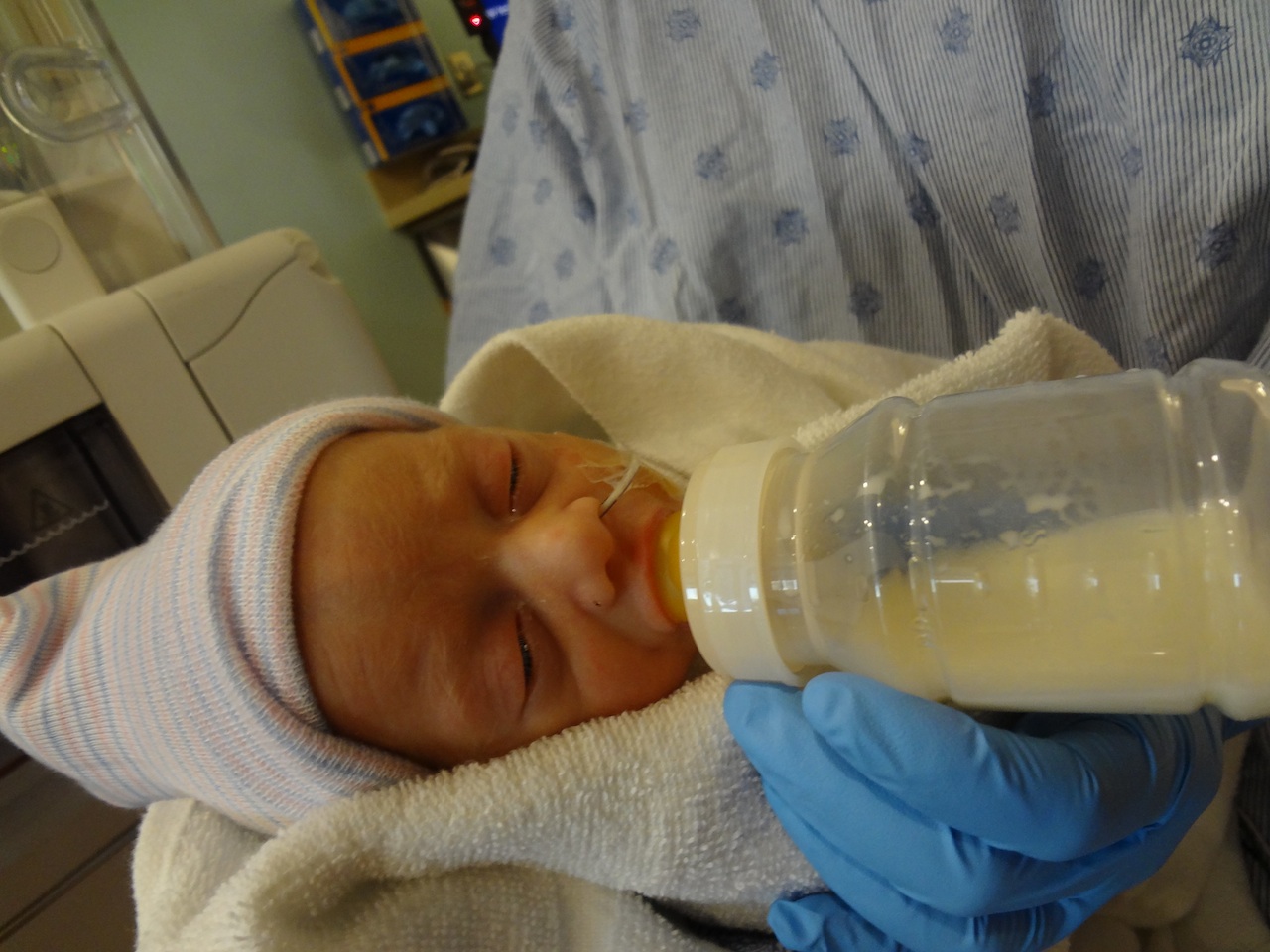 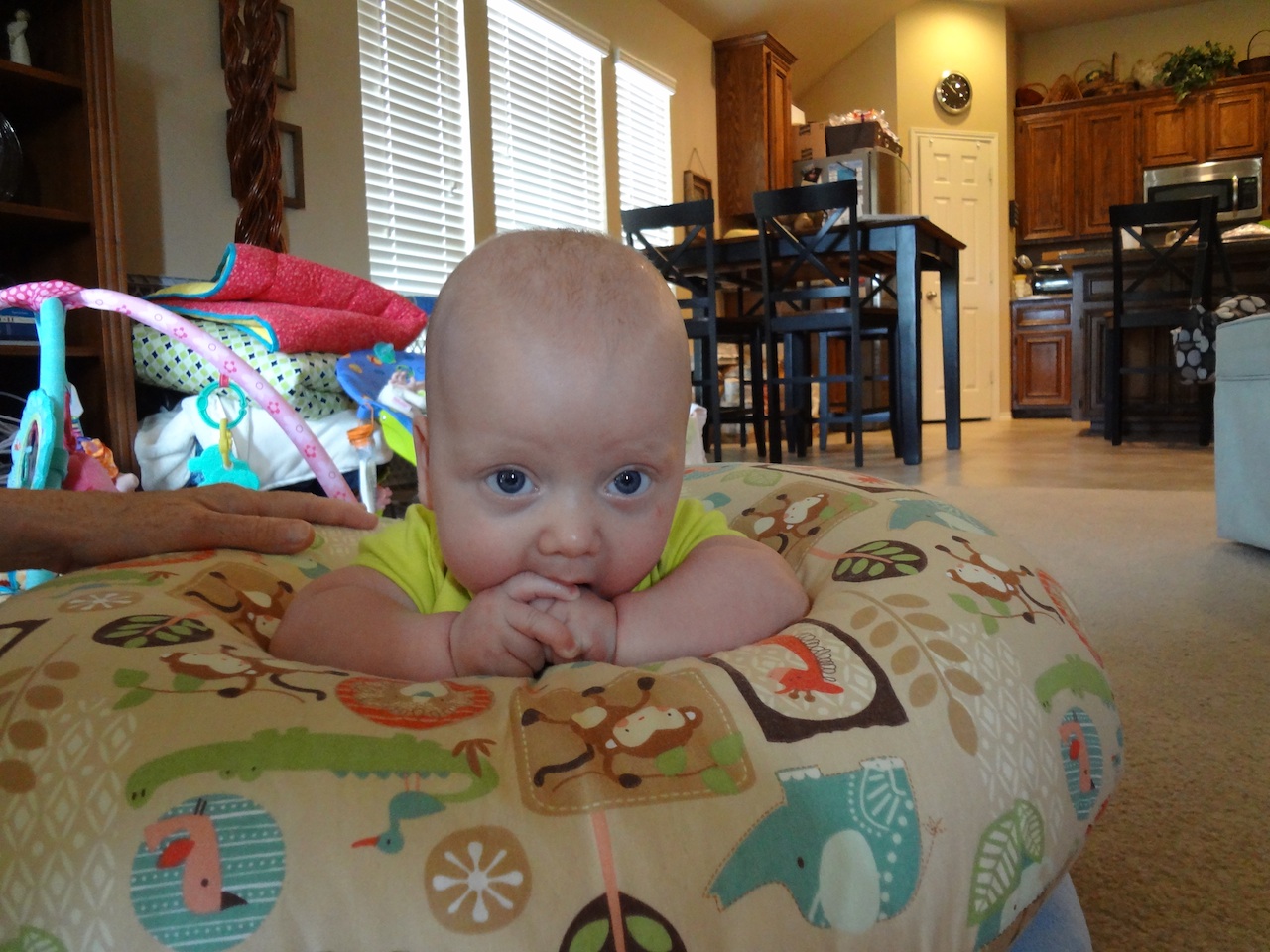 Andrew is my beautiful boy, and he'd much rather someone hold him all the time than put weight on his legs.  That's how he's earned his latest nickname- Twinkle Toes.  Really, he looks like a male ballerina.  He is still a flirt and my future job prediction for him is an Abercrombie model or a male dancer -ha!  He's the biggest laugher.  He loves when people talk real low or make funny faces at him.  When he laughs he chuckles like a hillbilly.  He's so close to rolling over, which is actually a shocker since he and Ben are the worst at motor skills.  Andrew still has no patience and can go from 0-60 in no time.  Sometimes you can't tell if he's happy or mad, but in the mornings he is all smiles.  So far, he is the only one really showing any acknowledgement of his siblings; he looks at them often and sometimes curiously reaches out towards them.  He's in size 2 diapers and 3 mo or 3-6 mo clothing and drinks 6 oz of formula in each bottle. 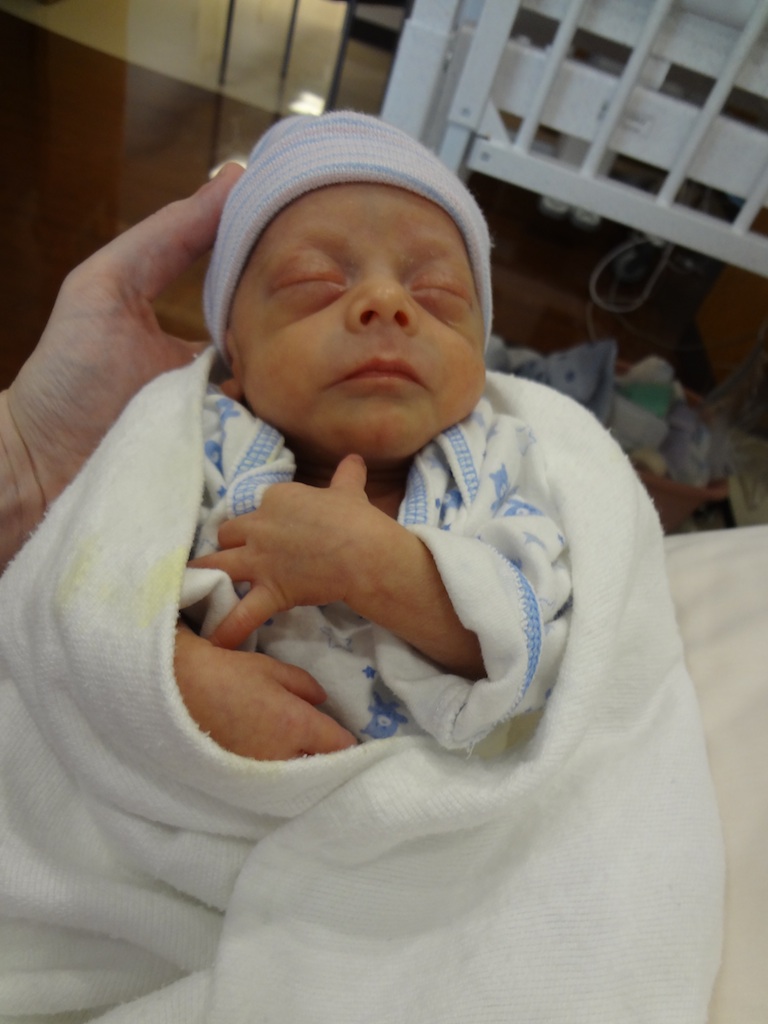 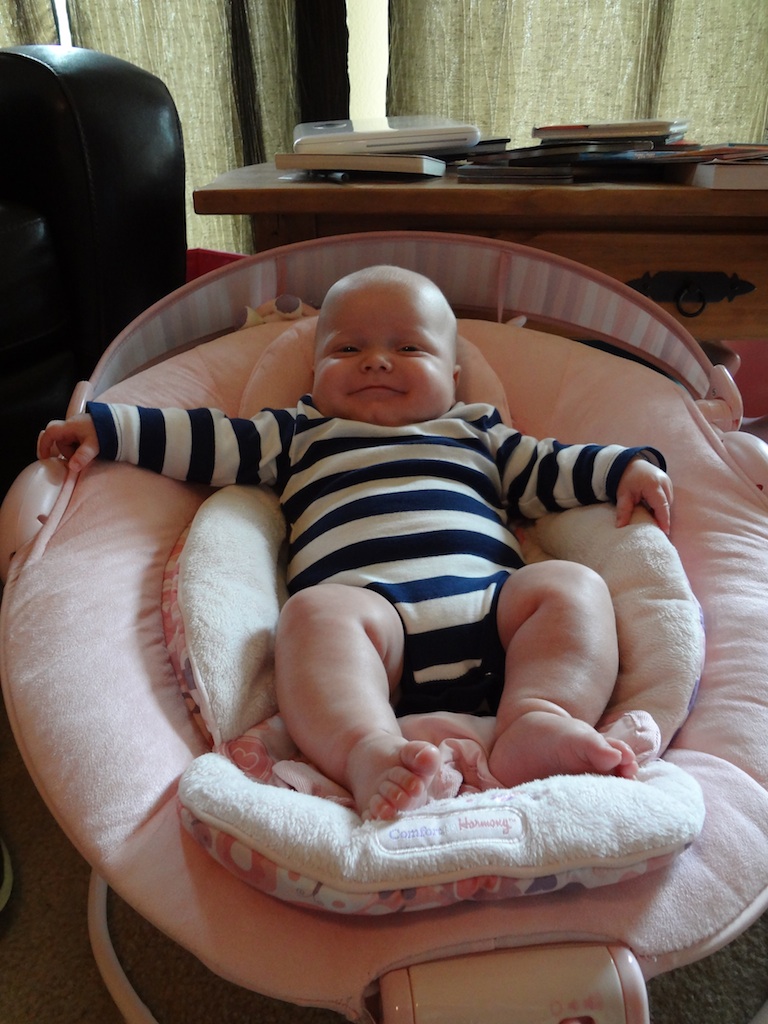 Oh Benny Boo Boo how you've grown!  He is heavy!  One of his new favorites is being lifted up high and "slammed" to the ground.  He laughs and smiles so big every time.  Unfortunately for him, his mom isn't the strongest so I can only do it a few times before I need a break- like lifting Leah or Allison.  He is by far the most "talkative".  He squeals and coos and babbles ALL THE TIME.  It's so cute and hilarious.  He is definitely the happiest, most content baby- except when you make him exercise.  He loves to sit in his Bumbo and watch TV or look out the window.  He can entertain himself as well.  Often times he is lying in his crib looking around, babbling, and leg slamming until he sees an adult enter the room, then he cries to be picked up.  This has resulted in all of us ducking around the babies rooms.  He's in size 2 diapers and 3 mo or 3-6 mo clothing and drinks 6 oz of formula in each bottle.  His predicted future job is a football stud. 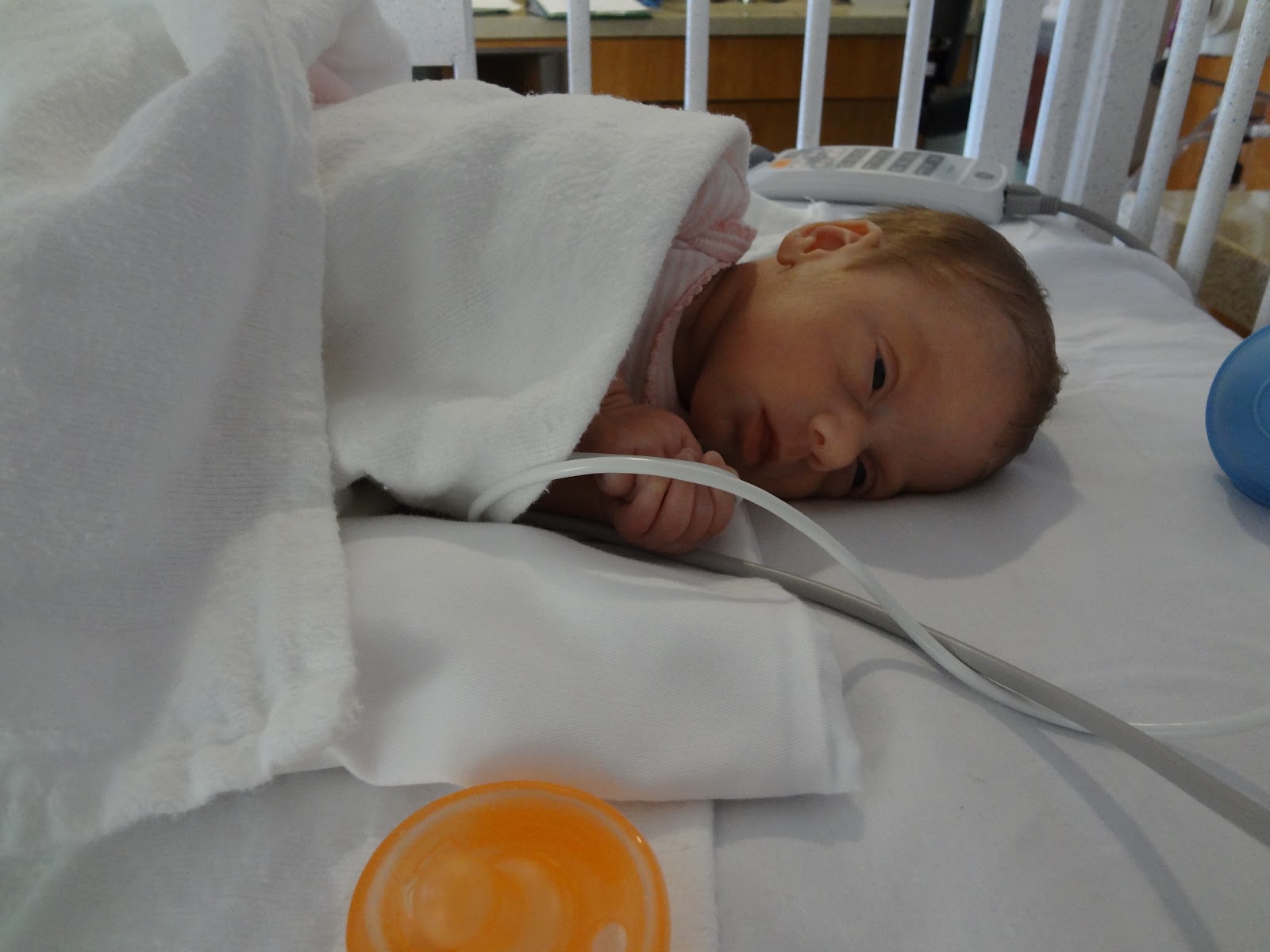 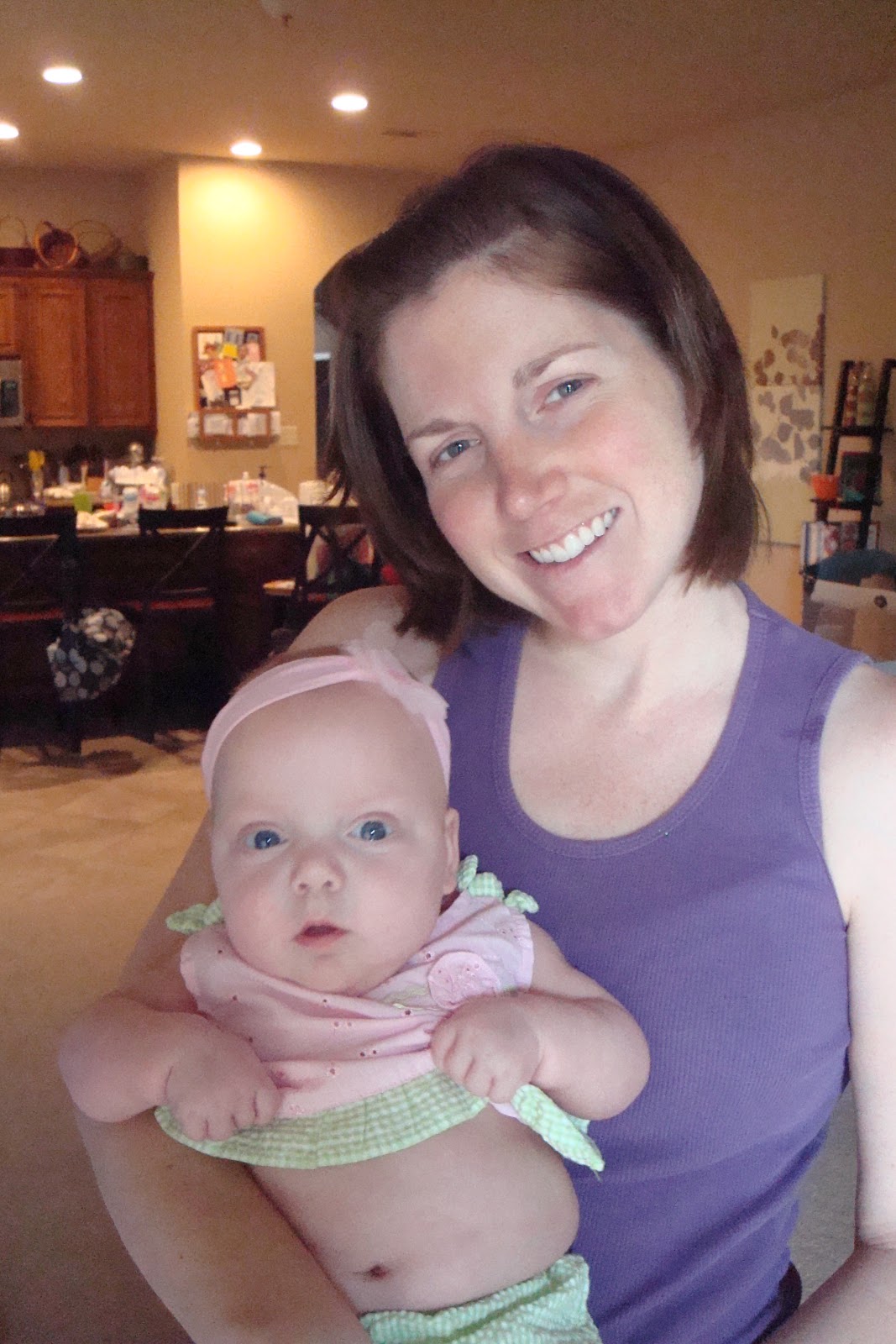 Sweet Caroline- remember when you were my dainty girl?  Now you've got a belly and you are proud of it!   And the Gassy Girl nickname is still very accurate.  Her predicted future job is a Roller Derby Queen with the slogan "don't light a match around me"  Besides tooting, she loves to stick her tongue out and suck her two middle fingers.  She'll take out her pacifier so her fingers can fit.  The nice part is that she's good at soothing herself, bad part is that it could turn into a habit that's hard to break.  She's the best at propping herself up on her elbows and almost rolling.  Caroline is sticking to her 45 minute naps.  She has the biggest smile!  She's in size 2 diapers, drinks 6 oz each bottle, and wears 3 mo- 3-6mo clothing. 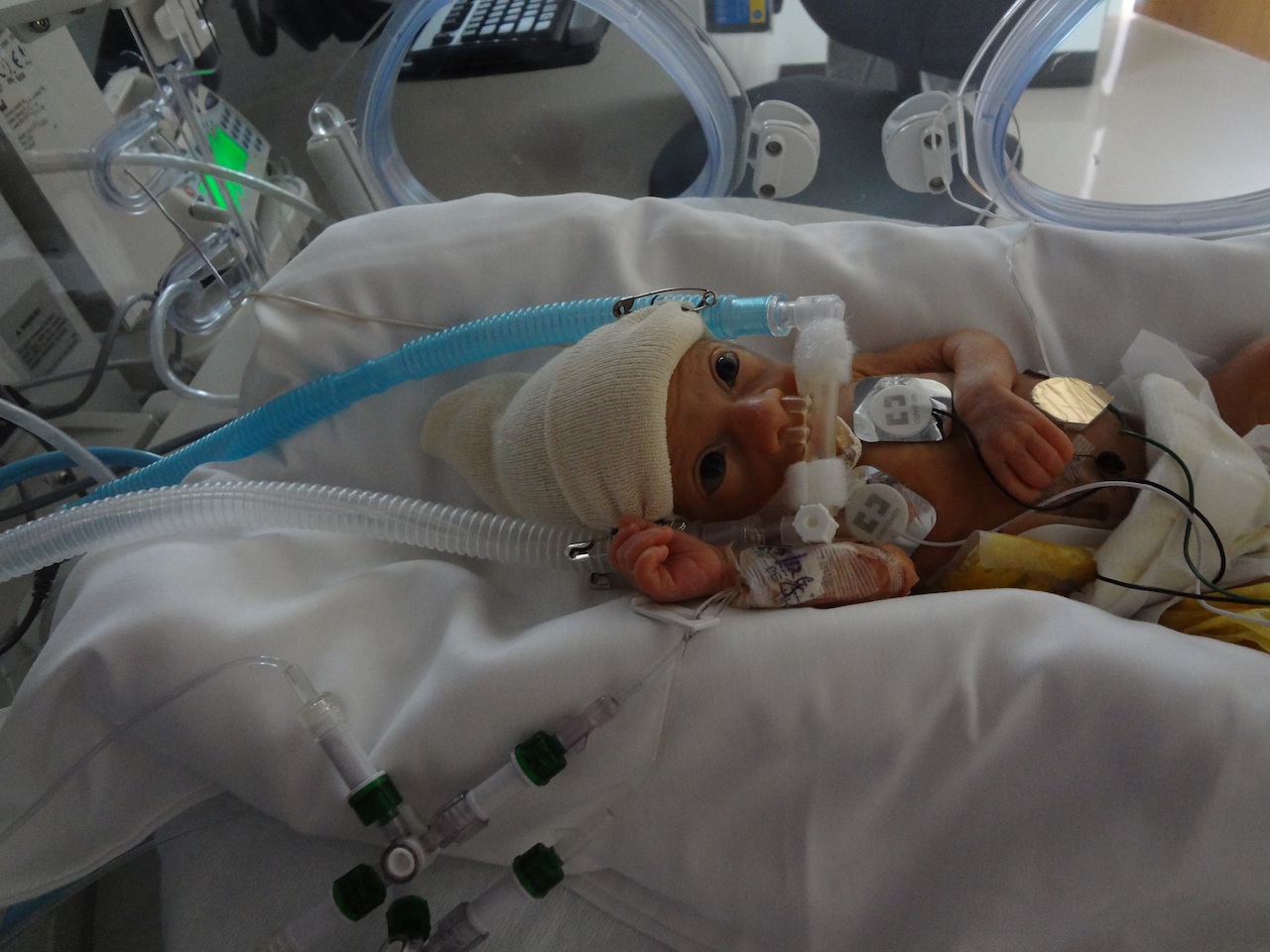 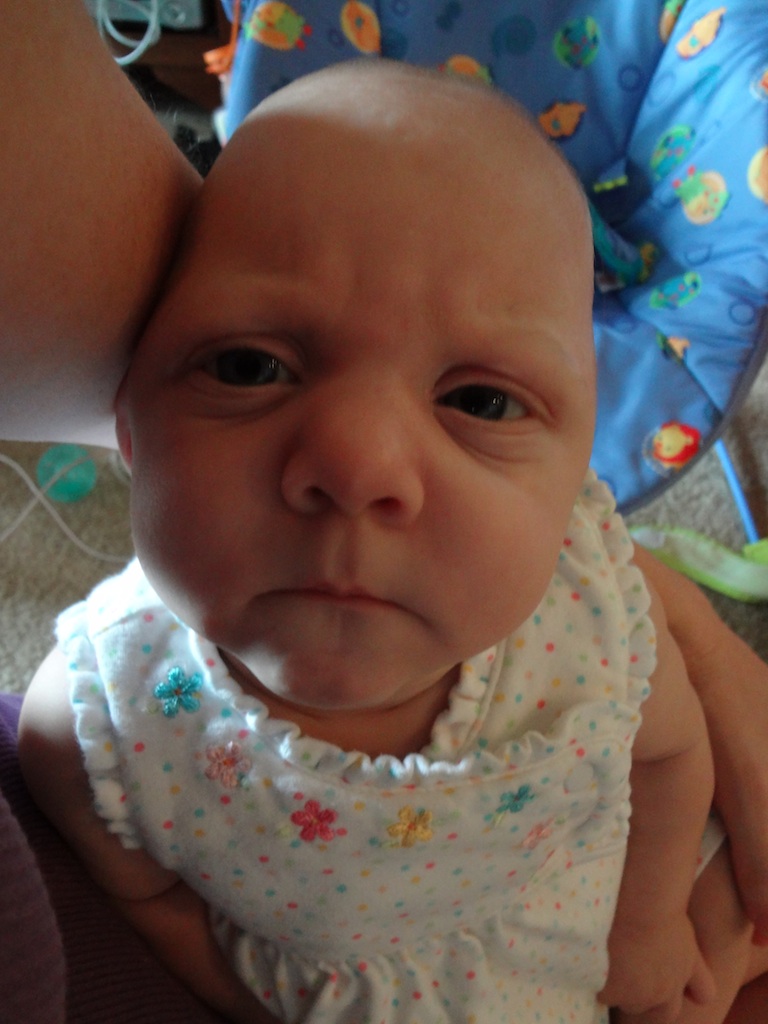 The cutest mean mug I've ever seen!  Especially when she makes the effort to turn her head and give me a sideways mean mug- just to make sure I know she doesn't like whatever I'm making her do.  She has the longest legs!  Her hands and feet are pretty big for her body too.  She can be easily startled and screams for everything- it's really her only cry.  That's why I predict her to be a horror film actress- she can scream!  She loves to cuddle, suck her lamb pacifier (I've named it Lamby), swing, lie on blankets, and be held in a sitting position.  She is always looking around and checking things out- especially the person holding her.  She looks like she's thinking "I don't know about you, but you are holding me and I kinda like that..."  She hardly sleeps during the day, but at night she's a great sleeper!  Of course, she's being continually fed so she doesn't get hungry.  My little Leah Peah is in size 1 diapers and just switched to 0-3 mo clothes.  Her feedings are forever changing.  I'm so glad this sweet girl is finally home!  She definitely keeps me on my toes! 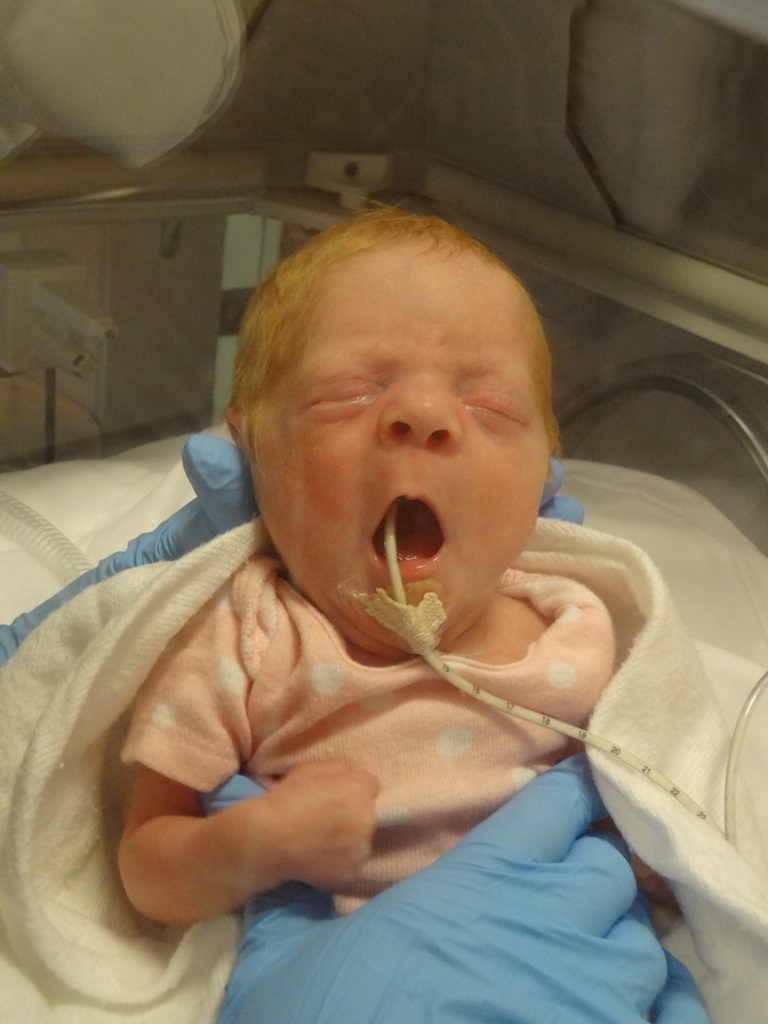 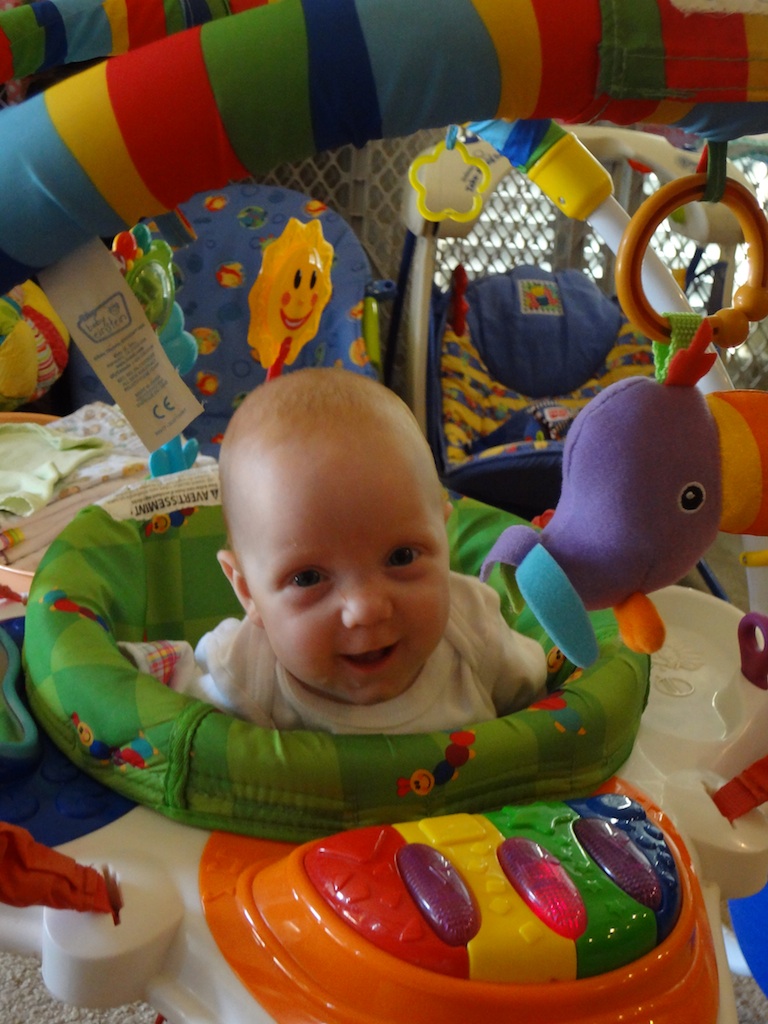 My little smidgen!  She's going to be my gymnast or a cheerleader.  She is the wiggliest and gets so excited.  All you have to do is look in her direction and she gets the biggest smile on her face and kicks her legs.  She loves to move!  She's happiest being held so she can see out and if you're walking around-even better.  Allison is still the pokey, finicky eater (even pushes the bottle away); but it's because she's too busy smiling at you or trying to see what's going on around her.  Or she's asleep.  She loves being on her tummy and doing assisted standing.  My dad says she has an altitude problem- she needs to be at a higher altitude, like 5 or 6ft high.  What makes me laugh every morning is when I hear Allison making her noises and cries and as soon as she sees me she starts wiggling and smiling.  I think her life motto is "who needs food or sleep when there's so much to see and do"  My mom has always told me she hopes I have a child who never sleeps so I could be tortured like I tortured her.  So, I know where the sleep fighting comes from, but the refusing to eat?  That's a mystery.  She's in mostly 0-3 mo size as of this week, still some newborn.  Size 1 diapers.  Averages 4 oz each bottle on the higher calorie formula. 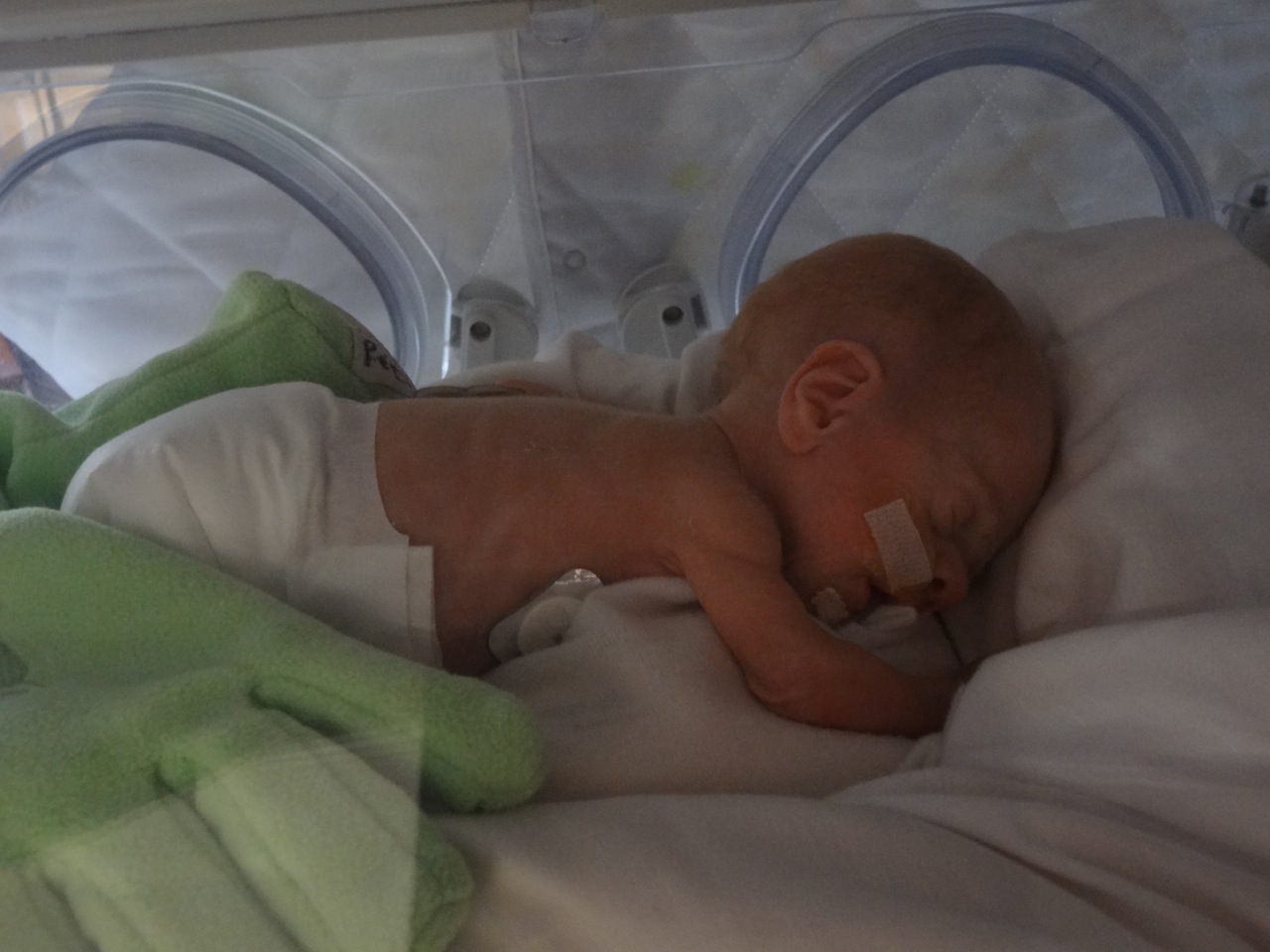 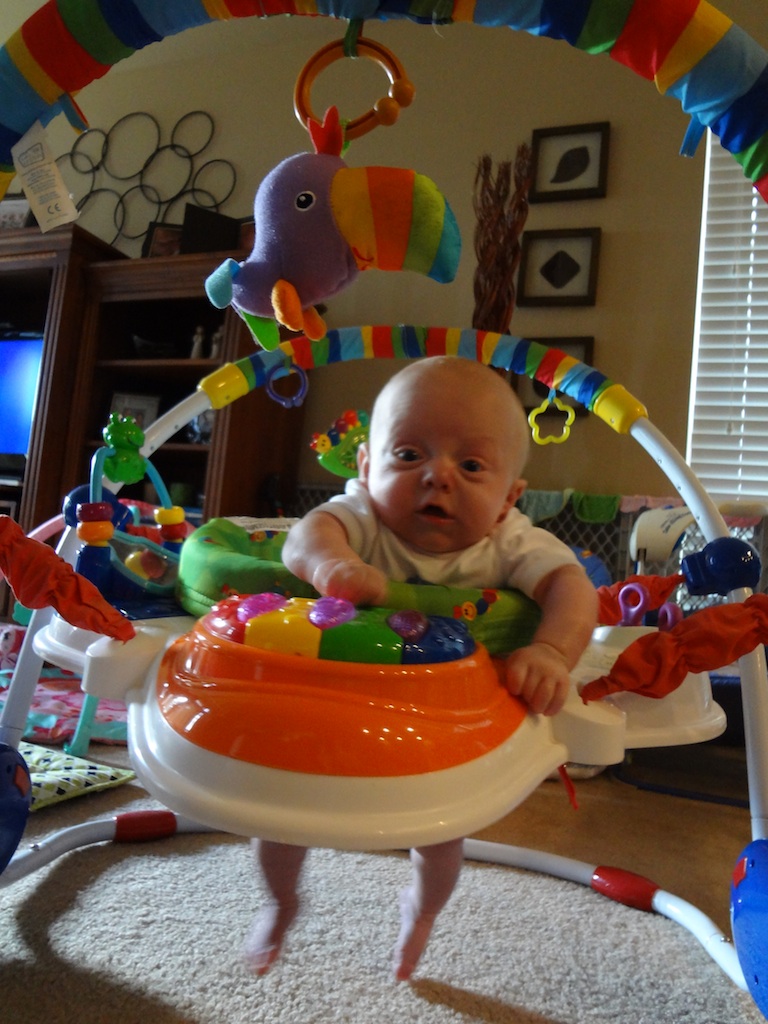 Little Guy Levi!  He sure does love that jumparoo.  He makes the best facial expressions!  He's much more smiley lately and even laughs from time to time.  One day he was hysterical over Maggie barking.  She barks all the time, so I'm not sure what was so special that day.  He'll be my professor; he studies everything and is usually fighting sleep so he doesn't miss something.  He's in size 1 diapers, 5 oz per bottle, and some newborn and some 0-3 mo clothes.  Levi is finally filling out and even has a little belly and little rolls!  His head is very odd shaped, so I'm thinking he'll need a helmet.  He loves the swing and mirrors.  His motor skills have gotten much better- he can now push up on his tummy and lift his head high.  Levi also has the most girlfriends (3) while his brothers each have 2.

There you have it- the Perkins Pack at 6 months.
Posted by Perkins Family at 12:05 AM