In other words... Leah is home!!  We were in such a routine of home/hospital that it took a few days to sink in.  Yesterday I realized I was still carrying around my cell phone 'in case the hospital calls'; then it dawned on me that the NICU would never be calling again!  We are official NICU graduates and the first set of sextuplets in Texas to all graduate :)

I realize I was horrible about updates in September which means 2 things: it was hectic and this will be a long one.

The week before Leah's homecoming was jam packed with Allison's going ons, media, and discharge planning.  Allison had her spinal ultrasound and her echo and her regular PT appointment.  The echo came back normal which was great news!  The first review of her ultrasound didn't reveal anything of concern, but on a second look the radiologist saw a possible vascular lesion so she has an MRI scheduled in a couple of months to get a better image.

Planning Leah's discharge was quite the undertaking with setting up her follow up appointments, getting medical equipment and home nursing arranged, figuring out her feeds, and negotiating the media.  We ultimately decided to do an interview with the Chronicle and Today- with the hospital videographer filming the same footage to share with local media.  We negotiated from them coming to our house to them just filming our arrival and feeding the babies at the hospital.  The Pavilion for Women hosted a 'send off celebration' for Leah and we lugged all siblings up there for the hospital staff to see.  We also got our first family photo which I LOVE!!  I literally spent days planning for this event- arranging volunteers to help us, making a timeline of when things needed to happen on our part and media's involvement, making packing lists and packing the stuff, and arranging who was going in which vehicle.  My timeline for that day started at 8am when a friend came to pick up the mega stroller and it was nonstop from then until we arrived at the hospital at 1:30pm and then home again at 5:45pm.  In all it took 4 vehicles and 7 volunteers to have the day run smoothly.  The babies did amazingly well through it all even with a feeding and lots of waiting around.  The only mishaps were dropping the stroller headrests in muddy water (last minute washing), Dave's truck not starting (last minute car seat rearranging), and Leah having an x-ray ordered when she was supposed to be discharged and on her way to the party.  Somehow none of these things made a big impact and the party started on time and went off without a hitch!  The Today show even stuck to our arrangements on when and how long they could film and interview us.  They filmed and interviewed us during a feeding which was somewhat of a challenge, but killed 2 birds with 1 stone.  It was fun to see the people who took care of us for so long and show off how big the babies are now.  They didn't recognize them :)  And of course I enjoyed the cake!

The media coverage of Leah's homecoming was quite widespread and overall well done.  I've heard of stories done in London and South America and Puerto Rico- who would've thought?!  I felt the Today Show did well, though they dramatized Leah's situation and showed me saying "I've gotten pretty good with my stroller people" (what happens when you forget you're mic-ed).  They did bump us from airing on Tuesday morning to Wednesday morning because of the breaking news of Kate Middleton's topless photos.  Boobs before babies.  The local news did nice positive stories, as did the Chronicle.  I thought it was comical they called me a 'veteran mom'- since when does 4 months in make me a veteran?!  We also got some additional tv attention- got our 4th reality show request and an invitation from the Dr. Oz show.  At this time, we have turned both down.

Leah's first week has been a challenge.  Overall, I think she has done well considering how long she was in the hospital and her having more issues than the others.  The pediatrician was impressed with how she's been.  She is currently using a feeding tube at night and bottles during the day and we have a home nurse for night time for a couple of weeks.  Bottle feeding has been difficult; her original formula tastes nasty and she hates it.  It was taking an hour to feed her because of her screaming fits in between every sip.  We have her on a different formula mixed with some breast milk now and it is better, but she can still scream and fight.  She is STRONG- like had to have an extra person help hold her down when blood was drawn strong and she only weighs 8.75 lbs!  She doesn't nap much, but once she goes to sleep at night she does sleep well.  She seems to have 2-3 unconsolable fits a day besides feeding and bed time.  She is adjusting though- all she knows is her NICU bed, so everything is new and confusing and overstimulating.  What's difficult at feeding times is that she requires lots of one-on-one time and I typically feed 2-3 babies when needed.  But we just love our little Leah Peah so much and are so glad she is home!!

We have had some other fun events lately... a friend got our living room carpet and bathrooms cleaned (woo hoo!) and while that was being done we moved in to our neighbor's house for an afternoon.  It was fun to have a successful adventure even if it did throw the babies off their schedule a bit.  The best part was seeing her daughter's face when she got home from school and all the babies were there :)  Dave and I have also had a couple date nights this month thanks to some fabulous friends!  Got to do dinner and a movie and dinner with friends at their beach house in Galveston!  I've had a couple girl outings too- pedicures and lunch dates- thanks to Dave's mom coming to help and allowing me out of the house!  As much as I enjoy my babies it's always nice to get a recharge break.


I will try to update a little sooner next time!  My parents are back (yea!!!) so I may get some more free time- maybe. 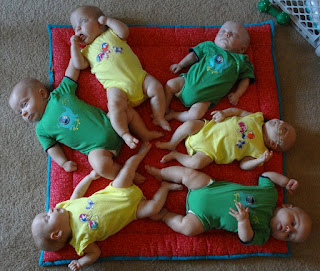